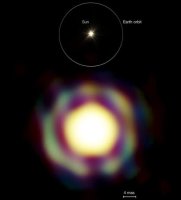 Our research targets all radially pulsating variables from the AI Velorum stars with very short periods of an hour or so to supergiants such as Betelgeuse or R Leporis with periods of a year or more.

The amplitudes at visual wavelengths range from a few thousandths of a magnitude to ten or so magnitudes in some Mira stars. The amplitude will determine what techniques should be used to study them: visual measures relying only upon the eye and a comparison sequence of stars; or specialised methods using photoelectric photometers or CCD cameras which can be accurate to a few millimagnitudes.

The energy produced inside the star is not changing – except perhaps on a long timescale as it evolves, or abruptly as a result of some discrete event. But as it travels toward the surface it passes through regions where temperature, density and pressure are such that repetitive oscillations take place and shock waves result. We see these as changes in brightness, colour and, if we use radial velocity detectors, as movement of the surface in and out at rates of up to 10-20 kilometres per second.

HERTZSPRUNG RUSSELL DIAGRAM, showing the evolution of a sun-like star and some more massive stars.

With the longer period pulsating variables our interest is in the red giant branch which precedes the helium flash when helium begins to burn – and also the asymptotic giant branch where Miras are located.

The location of the semi-regular stars and the SARVs is uncertain. They probably occupy all parts of the RGB-HB-AGB path on this diagram, perhaps even higher.

The energy produced inside the star is not changing – except perhaps on a long time scale as it evolves, or abruptly as a result of some discrete event. But as it travels toward the surface it passes through regions where temperature, density and pressure are such that repetitive oscillations take place and shock waves result. We see these as changes in brightness, colour and, if we use radial velocity detectors, as movement of the surface in and out at rates of up to 10-20 kilometres per second.

Generally, we are trying to study the evolution of stars in the H-R diagram: also to determine whereabouts on this they can be fitted at present. The traditional method has been to time the pulsations to see if we can detect changes in the star’s period – the interval between one maximum and the next. With Mira stars this requires only visual measures and the epochs of maximum are plotted on what is known as an O-C diagram. Here the observed times are plotted against a calculated series of times (an ephemeris) to see whether they are deviating. Examples appear below.

The first of these shows what is fairly common behaviour with periods alternating at intervals. The mean period is 334 days, but the actual periods change abruptly between 332 and 336 days. This must be telling us something about the star-but we’re not certain at this stage what the message is.

R Hydrae is a star which had a period close to 500 days in 1666. The actual periods are plotted in the upper plot but in the lower one we show O-C deviations again. The period change is attributed to a sudden onset of helium burning in a shell which caused the star to shrink and increase in temperature-but we have no temperature information back in 1666 to check this!

So far, it’s quite simple but many stars pulsate in two modes so that two or more periods are present at one time. Then there are low amplitude stars unsuited to visual measures where electronic methods such as CCD or photoelectric photometry are necessary to measure the star’s behaviour with the necessary accuracy. With very short period stars it’s often necessary to involve astronomers at many different longitudes so that the number of cycles between sets of measures can be determined accurately.

All of this is known as time series photometry (TSP) but we can then venture into a different area, colour photometry, which often tells us a lot more about the star.

The simplest form of colour photometry is using two filters, preferably B and V, but often V and R or V and I. More about these in a moment, but all of these two filter sets provide information about the temperature of the star at the moment of the measure. Thus we can measure the temperature changes during a cycle from bright to faint and back again.

These colour filters range from U, in the near ultra-violet with a median frequency about 0.380 microns, through B(lue) V(isual) R(ed) I(nfra red) at about 0.850 microns. The I filter is only near infra-red and is often supplemented by J at 1.25 microns and H at 1.85. There are many filters and systems beyond that but most are unsuited to amateur work.

U filter measures will reveal any gas clouds around the star. I,J and H are more suited to dust clouds. Hence we can detect evidence of a star shedding mass – and they all do – as it evolves. Shown is an actual photograph of R Leporis taken at the European Southern Observatory. The bright region is the star, the two level halo is gas and dust. UBVRI photometry is a quick and cheap way of deriving information about stars like R Leporis. 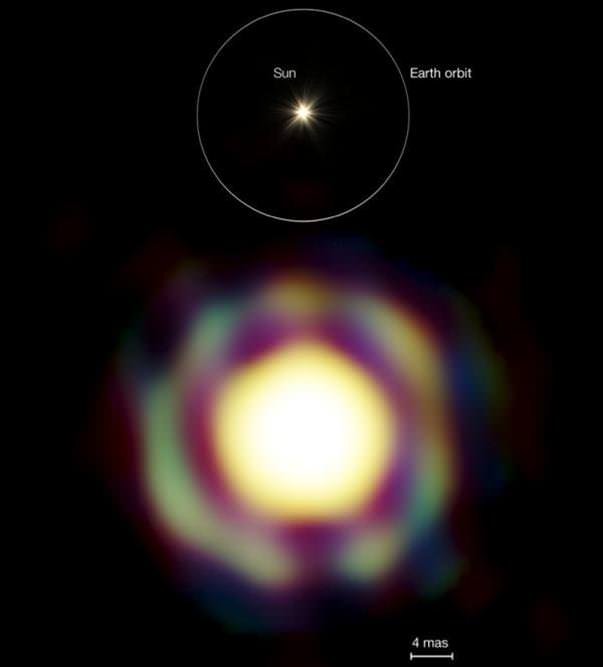 We’re initially developing observational projects which look at the longer period Miras, particularly those that exhibit double maxima. These seem prone to period changes and at times show humps or bumps on the rising and falling branches. This involves both visual observers and colour photometry. See Dual Maximum Mira project.

We’re also interested in the lags between maximum phase of these stars at different wavelengths. This will not be confined only to Mira stars but will involve many shorter period objects which are lower amplitude and less regular – the semi-regular (SR) stars. This has yet to be set up officially, but anyone interested may wish to suggest candidate stars.

The third project is experimental only, with a few participants testing its methods and feasibility. It involves visual and DSLR measures of selected longer period Cepheid variables. These are known to have abrupt period changes at intervals, and many are too bright for present CCD monitoring programmes. Here we are using different visual measuring methods in an attempt to improve accuracy. Seasonal epochs for 10-20 bright Cepheids-see Bright Cepheid project – will be compiled by fitting measures to mean light curves each year.

We wish our measures to have lasting value-so the quality needs to be high, and we need cooperation so that what we’re producing is not random data. There are about 30-40000 stars listed in the General Catalogue of Variable Stars-and there are probably ten times that many within the range of amateur telescopes, but as yet unlisted. So, it’s better to concentrate on a few stars and understand these well. The historical baseline is also important, as we can see in the case of R Hydrae.

Apart from these projects our group has contacts and access to a wide range of pulsating variable star observers-so if you’d like to observe something unusual like sigma Octantis, the southern pole star, and a low amplitude delta Scuti star with a period of ~158 minutes we can help you to find what has been done and what needs doing-and your measures will not be wasted.

Once the measures are made and mean something they need to be published-not just submitted to something like the International Database-in an accepted manner so that your work helps others immediately. We have various channels available and can provide assistance and advice if you wish to do this yourself with your own measures.

So check out one of our projects or contact me.