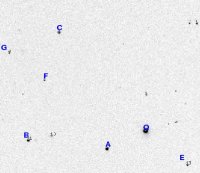 Ensemble Photometry – What it is, its advantages & how to do it

In the early days of photoelectric photometry, the detectors were single channel and required a focal plane diaphragm to isolate the target stars. Thus, all measures were sequential and usually involved a sequence like sky background, comparison star, variable star, variable star, check star, comparison star, sky. And the filters would require changing for each target, usually in some type of carousel as part of the photometer.

So, to do classical UBV photometry we’re looking at 21 sequential measures, hoping that the sky will remain clear during this time. This limited the number of objects which could be measured in a particular time. CCD cameras changed this somewhat in that in many cases all the targets were on the same image and sky background can be measured at this time as well. But BVR photometry still requires three sets of images, and the CCD fields are usually small. The DSLR camera takes this economy of time a step further in that the three colours are measured simultaneously. So how can these advantages be used?

The stars to be measured

A standard DSLR camera can work down to about V = 8 in comfort and, perhaps, V = 10 with 60 second images. This encompasses between 100,000 and 1,000,000 stars so there is no scarcity of targets. It requires about 10 images to reach a reasonable degree of accuracy, so imaging one star field will require about 3-10 minutes. But this is still faster than conventional PEP or CCD measures of the limited number of stars in one field.

Mark Blackford’s system provides a 4.5o x 7.0o field. This usually images 10-12 comparison stars of suitable colour to make ensemble photometry possible. As discussed in the section on Camera Response and Extinction this avoids many extinction problems. As we see below it also improves the accuracy.

When working at fainter than naked eye levels it’s often difficult to get good values for the comparisons. Planetarium type software like Bill Gray’s Project Pluto – Guide 8 – is based on Tycho measures and provides useful V values down to tenth magnitude. It also provides reliable B-V values, usually ground based, but occasionally calculated for Tycho transformations. V-R is less accessible but can be calculated using the formula B-V * 0.52.

In all cases the values adopted must be recorded and noted in any published papers. In joint projects try to select a standard ensemble.

This differs from conventional methods in that rather than comparing the variable star’s value to a single comparison and adopting a single check to ensure that the comparison is not variable the target star is compared to an ensemble of 4-6 stars. The value adopted is the mean of the various magnitudes derived. Statistically this reduces the errors by the square root of the number in the ensemble, say to 50% with four stars, 41% with six. Purists might argue that these differences be reduced to intensities, averaged and then back to magnitudes but the difference will usually be less than 0.001 magnitudes between the two methods.

Some additional measuring of values is required but the improvement in accuracy is worth the effort. A spreadsheet into which the raw values can be entered can be found in Conversion to the Standard BVRc System.

It is essential to continue a check on the stability of the comparisons and this is done in the section Managing the Data in any of the project descriptions.

Where DSLR ensemble photometry is effective

The main restriction of ensemble photometry is that it’s best when values can be interpolated. This applies to all photometry but, given the closer spacing of the BVR passbands in these cameras, extrapolation to very red stars will possibly result in faulty measures.

This leaves two very promising areas available: determination of epochs of maximum of Cepheids with periods up to 20 days – longer than this they tend to be cool and rather red; and eclipsing binaries with reasonably normal colours which would include most EBs with eclipses shallower than ~1.5 magnitudes. There are two such projects in progress for Variable Stars South: Bright Cepheids Project and Southern Binaries DSLR Project.

DSLR photometry might be effective in some cool star areas. We have been considering the value of obtaining BVR colours of part of Mira light curves either side of and across maximum to provide a historical record to monitor colour changes. Then there are a number of bright semi-regular variables about which little is known. These mostly comprise stars too bright for the ASAS project.

Carbon stars and others with very red colours are probably out of reach. A star like R Sculptoris is almost naked eye brightness but with a B-V of about 6 it would be beyond the reach in that waveband. But there is the prospect of V-R colours which might have considerable value long term.