Conversion of Data to the Standard BVRc System

You may think that when you measure a star through filters that the derived magnitude is a real measure of its brightness but, unfortunately, that is not the case. The UBVRI filter system was created by Harold Johnson in the early 1950s and was a major step forward in measuring the brightness of stars.

Prior to this there was a variety of detectors – the eyeball with its range of responses dependent upon the observer’s vision, photography with a range of films from blue sensitive films, through panchromatic to some red sensitive emulsions, and then photoelectric photometry with cathodes whose sensitivity peaked from the near ultraviolet to the near infrared dependent upon the cathode coatings.

Johnson and his colleagues defined a series of band passes to make best use of the available spectrum at that time. The U filter measured light shortward of and across the Balmer discontinuity, B measured a region in the blue part of the eye’s response, V was intended to give a visual rendition of the object, R was in the region where the eye is losing its sensitivity and I is in the near infrared. From these B-V and V-R can give a good indication of temperature, U-B will provide information about gas shells which are common in variable stars and R-I similar information about dust shells. The two long wavelength filters, R and I, have since been changed and this change sees them subscripted as Rc, Ic.

But if you’re just trying to make some simple measures, how do you sort out this complex scene? Simple measures come in two types – time series photometry (TSP) which is intended merely to measure light variations at a selected wavelength – and colour photometry which makes use of multiple filters to derive physical information such as temperature changes about a particular star.

The Uncorrected Measures and V Transformations

Mark Blackford measured a selection of stars in the field of RS Puppis. Initially the derived magnitudes were alarmingly discordant, see Figure 1. 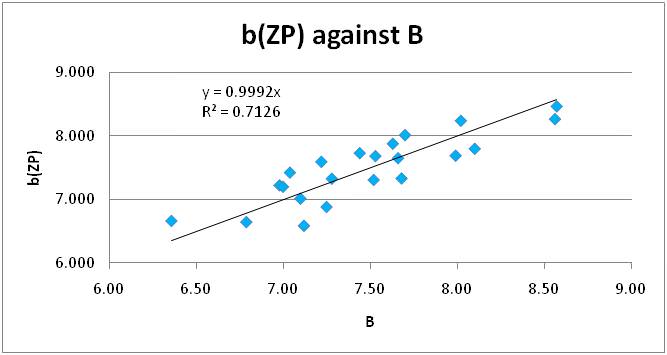 Figure 1. Measured raw instrumental b magnitude, adjusted by adding a fixed zero point offset, as a function of true B magnitude.

But there is a simple explanation for this as shown in Figure 2 – the V measures (and both B and R) are frequency or colour dependent and need correction if they are to be useful. 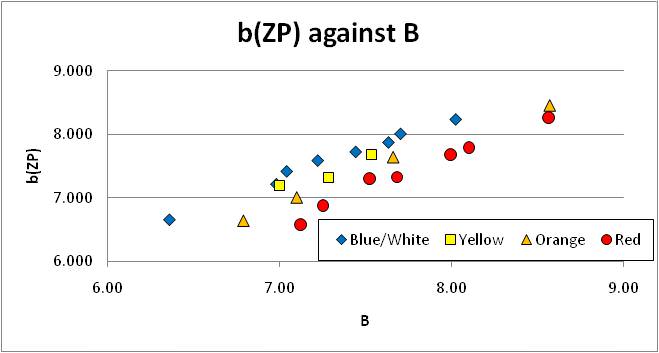 Figure 2. The same data as shown in Figure 1, but with stars assigned to one of four groups according to their B-V colour values. Clearly the measured b magnitude is influenced by the stars colour.

This correction can be achieved in two ways. If you’re only interested in TSP – perhaps you’re looking for period changes – then any one filter can be corrected by measuring stars of known colour and applying it to the response you get in any one filter. Since V is the most common filter for single colour TSP we’ll look at this.

Select some stars with known B-V or V-R and measure these with your camera reducing only the V filter values. Then plot v-V against either the known B-V or V-R and derive a correction factor. This is probably adequate for large amplitude variables with little colour change through a cycle but contains a number of errors.

Your DSLR camera is capable of much better photometry than this, however. So, let’s look at more precise transformations in all three filters.

Transforming to the BVRc system

What we’re doing here is moving, in effect, from black and white to colour. It’s quite simple but requires some careful photometry. We’ll use the Cape (of Good Hope) UBVRcIc standards as developed by Cousins and Stoy and extended by Menzies and others. It provides a series of standards – 9 regions at 45S, 3 regions at 75S and SMC and LMC regions. This standard system is better than anything in the north although Landolt and others have measured a random series of standards including some in the Southern Hemisphere but don’t use these. The Cape standards (with the exception of the SMC and LMC galaxies) form a regular pattern which allows extinction and other corrections to be determined readily.

Lists of suitable stars are available in the E Region Standard Star Lists. Select one of the E regions which is close to the meridian and take some images in the manner suggested in Setting up and Using the Camera. Then reduce these to magnitudes in the appropriate manner. Load the data into the Transformation Coefficient Template Spreadsheet which will plot V- v against V-R, b-v against B-V and v-r against V-R. The convention is to use small letters for the natural response of your camera, capitals for transformed or catalogue values.

This will provide values which can then be used with the Master Reduction Spreadsheet. Ideally the values should be around 1for b-v and v-r and zero for v but with your camera’s compressed response you’ll get significantly different values. Mark’s present system provides transformations of -0.22 in v, 2.05 in b-v and 1.26 in v-r.

At this stage you have determined a coefficient which is a mix of scale factors (the way in which the wavelength response of your camera differs from the standard system) and also secondary extinction (a colour term which is always present when measuring through the atmosphere). For a more detailed description refer to Camera Response and Extinction.

Can we make it simpler?

By careful selection of comparison stars and projects the values you have determined here can be used without further correction as discussed in Ensemble Photometry and Camera Response and Extinction. These sections are recommended reading. But in some cases, you may have to use the complete transformations. We have not designed spread sheets for these cases as we expect our DSLR projects to be restricted to areas where these are unnecessary. But it’s always useful to know the limitations of the methods in use.