Having determined how your images need to be corrected to conform to the standard system let’s look at the way the atmosphere effects these measures. This atmosphere is rather unpredictable, even when it appears clear, and the best approach is to make your observations in a manner which makes these corrections unnecessary. But you need to know how and when they affect your data so that they can be avoided.

The notes on Ensemble Photometry discuss projects and methods of doing this. But in some cases – with very red stars or at low altitudes – these may not be possible. But the normal observing rules are observe at good altitudes and use comparisons of similar colour.

We saw when determining the transformation coefficients that the R, G and B passbands are closer together than the R, V and B but even so the systems can be matched quite effectively. The BVRc system produces values that represent the magnitude and colours that we would see if we were above the atmosphere. But unfortunately, we are not so well placed and for the most accuracy we must remove the effects of the atmosphere.

Light travelling through the atmosphere loses its brilliance, partly by interacting with air molecules and heating them, but also by being scattered by collisions with these particles. We call this loss of brilliance, or energy, extinction. This extinction is much more pronounced at shorter wavelengths – which is the reason the sky appears blue. The column of air at the zenith is referred to in this context as an air mass (X). On the horizon it’s obviously many times greater. At Auckland we would experience extinction through the various filters over a difference of one air mass (X) as something like: U = 0.25; B = 0.20: V = 0.15; R = 0.12; and I = 0.10. On a night with a strong inversion layer these could be up to 40% higher. If you’re observing from a city there’s usually also an azimuth effect due to smog and pollution in certain areas.

We can, therefore, identify two extinction components when using these cameras. Primary extinction can be defined as the loss of light through the V, B-V and V-R filter combinations. But there is obviously a colour term which is smaller but still important. These ideas are shown in Figure 1 where changes in brightness and colour are plotted against air mass. This points to the first solution – have the comparisons close to the variable so that deltaX is always small.

How Good is this Uncorrected Photometry?

Without extinction corrections the photometry is probably good enough for many purposes. Because all the stars are within a few degrees of one another primary extinction is insignificant except at low altitudes. But all measures still include the secondary (colour) extinction. They will be altitude dependent in the colours, particularly if you use B-V or U-B. For colour photometry of LPV stars it’s probably not essential to get rid of the secondary extinction except when the B-V is large, say 3.0+. But then how reliable are the other transformations with such a large difference between the comparison and variable star? In many cases, such as binary star modelling, it pays to be very accurate—see Bob Nelson’s series of articles in the 2009 and 2010 Newsletters. 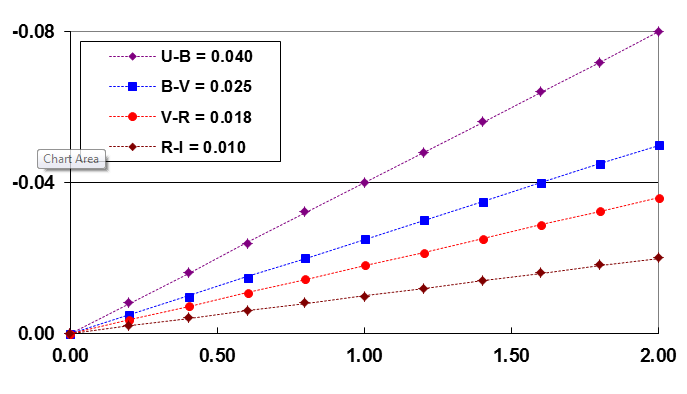 Figure 2: In this figure we plot response against colour. Once again, we’re concerned with colour differences. The vertical scale shows secondary extinction per air mass in each pair of filters. Notice that as the stars becomes redder it appears brighter. So, the secondary extinction correction needs to be applied to make red stars appear less bright. Once again, by having your comparisons similar in colour the effect is removed. But for very red targets we cannot find comparisons of similar colour, so the term becomes important. However, with these red stars any colour information is valuable so don’t be put off by the limitations.

Whilst it seems that V-R would be a good substitute for B-V without problems there are reasons for trying to get good B-V values. It has a longer baseline than V-R so the temperature corrections should be better. As well almost all variable stars have larger amplitudes at shorter wavelengths – an effect of temperature changes during the cycle – so epochs are easier to determine with this larger amplitude.

So let’s determine these extinction corrections to see how significant they are. For a more detailed description of these refer to the November, 2010, Newsletter, page 26. It’s better to use the instant method described by Hardie than rely on measures of a red/blue pair as they travel though a range of air masses. This latter assumes very steady skies, and these are rare. We need red/blue groups in several E Regions to give a range of air masses (X). One near the meridian and two at lower altitudes. They will normally be the meridian E Region, say E8 in November, then two at +/- 2 regions, say E6 and E1. This will usually give a range of about 0.6X. Once again, repeat your meridian region measures at start, middle and end of the sequence and adjust all observations if necessary.

Now extract the secondary terms from the scale factors and it’s all done.

Don’t stop with this, however. Keep a watch on the extinction at any time you measure the same or similar stars over a range of air mass. And you should probably check the scale factors each six months, or whenever you change anything in the optical path. The secondary extinction values don’t change much.

When photometry was first attempted there was no standard system so in order to minimise these extinction effects is was best to use a comparison star of similar colour close to the target star. This has not changed. But unlike conventional PEP where it was difficult to measure many stars at one time DSLR collects light from all stars in the field. This allows primary extinction to be overcome in two ways – either by measuring near the zenith so that the air masses are similar, or by selecting comparisons so that the average air mass is always similar to the variable. This is discussed in more detail in Ensemble Photometry.

This also applies to secondary extinction. If the average colour is similar to that of the variable the effects are negligible. The first DSLR project targets Cepheid stars and uses ensemble photometry, and the colours allow both these conditions to be met. This is not the case with some other prospective projects where there is a large colour difference, e.g., Mira and Semi-Regular stars. Care must also be taken with eclipsing binary projects if the colours of the components are too dissimilar.

There are advantages in avoiding the need for extinction corrections. Calculations are simplified as there is no need to determine the air mass of each star measured. Primary extinction is highly variable – it usually lessens during the night as the particulate matter in the air is cleared by wind or dewfall – and is not maintained by human activity. But if there are passing clouds there will be a change in the before and after levels of a few percent. Secondary extinction is usually fairly consistent but can change as a result of bush fires, volcanic eruptions, etc. So, it pays to understand these things, even if your observing techniques are designed to render them unimportant.