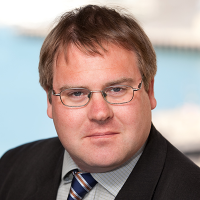 Tom Love's interest in astronomy first emerged in 1987, sparked by Albert Jones' discovery of Supernova 1987a. He was an active amateur astronomer in the Dunedin and, later, Canterbury Astronomical Societies in the 1980s and 1990s, and was the first observer for the MOA programme at Mount John in the winter of 1995. He has recently returned to astronomy and has been exploring the world of spectroscopy on small telescopes, working in particular on eclipsing binary projects.

This talk sets out some of the technical considerations and requirements for using modern spectroscopic equipment with small telescopes. It looks at commonly available systems, describes the potential and the limitations of off-the-shelf spectrographs, and describes some of the options for reducing and analysing spectroscopic data.

Title: Variable stars: what you can do with a rainbow