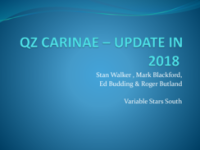 The quadruple system of QZ Carinae is interesting as one of the most massive multiple star systems in our galaxy, but also challenging due to the orbital period of the eclipsing component being only 124 seconds short of six days. As a result its phases at one particular longitude repeat only every 11.5 years. Observations of the eclipsing pair began in 1971 and measures of the light time effects (LTE) which have an amplitude of ~12.7 hours show that the two pairs of stars have not yet completed one orbit of each other since then. With the help of observations from the BRITE-Heweliusz (BHr) satellite a better mean light curve has been prepared and the various LTE values recalculated to provide a more accurate picture of this orbit. Measures of the primary eclipse by Variable Stars South members in 2017 and continuing in 2018 seem to indicate that the total phase may be slightly shorter than previously believed. Our present understanding of QZ Carinae is reviewed in this presentation.